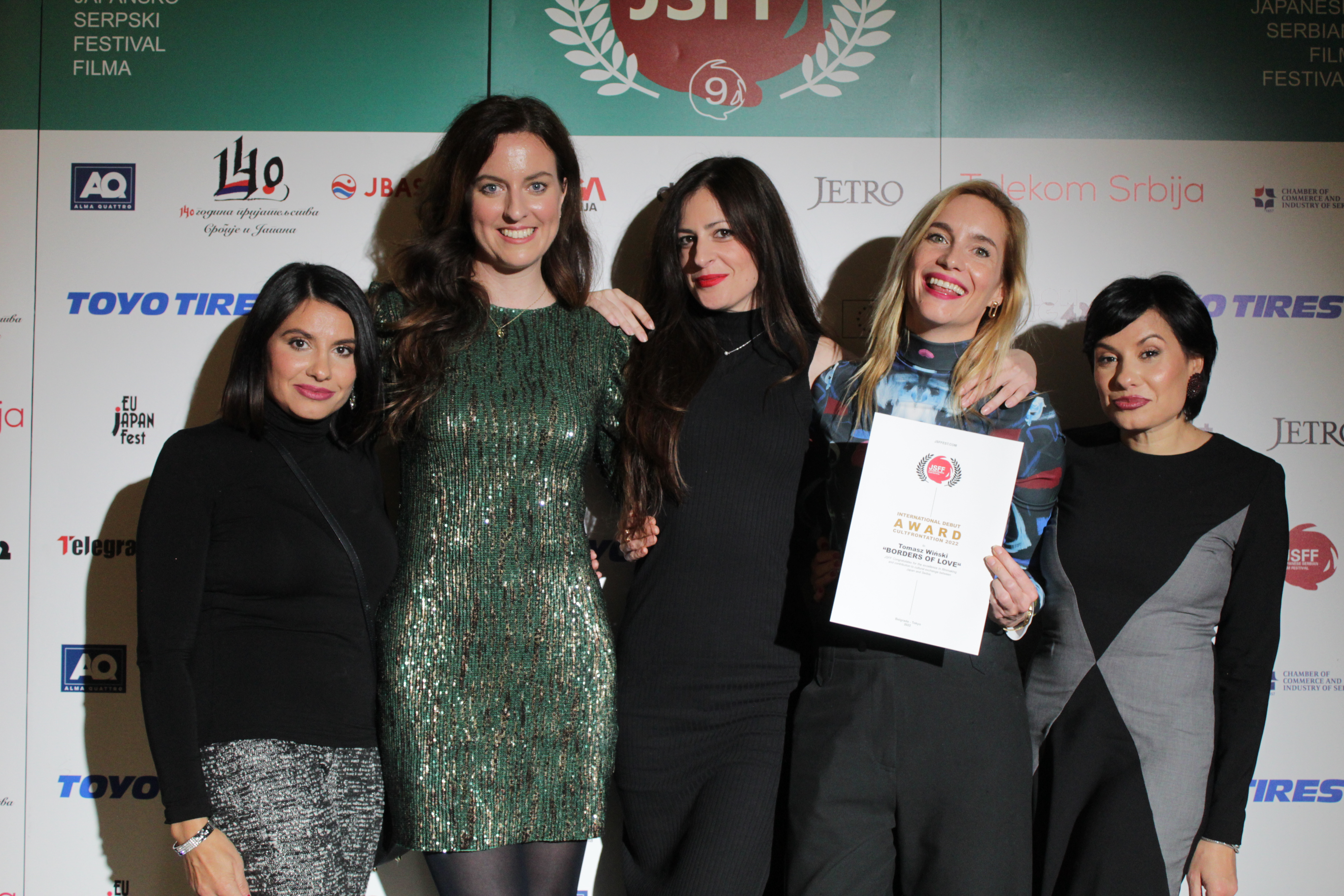 We believe that this format of the festival was the reason for establishing a beautiful multicultural cooperation.

1. You have an amazing festival: Japanese Serbian Film Festival. How did that idea and realization come about?

Thank you very much for this kind of introduction, I would say it is a bit binding that we justify these expectations every year. 😊 Everything that lasts is based on an honest relationship. That's how JSFF was started; with friendship, as the idea of ​​all the founders to exchange the contents of these two countries through cultural events. It is founded as a short Japanese film festival, after one year, it received a thematic bi-city format and is held in parallel in Belgrade and Tokyo, showing films from both countries on a given theme. Cultural exchange is the identity of JSFF today. This year we formed an international as well as a regional selection category EAWB (East Asia – West Balkan), where we wanted to expand that film dialogue. I have to praise the excellent Croatian authors who presented their works within that selection.

Nine years ago, when we started the festival, I would have had a completely different answer than today. JSFF helped us to better understand people in Japan and to realize through comparative content that we are essentially no different. Through this realization, the narrative of "us and them" disappeared, because with the festival we are used to togetherness. What differs are the details, the approach and the ways to solve the problem. There is nothing I see as negative, just challenging. Their preparedness, precision and consistency are qualities that are a challenge to achieve, and the first impression I took from Japan was that people are cordial, full of respect and gratitude.

3. How do your Japanese colleagues view this cultural difference? Are some of your characteristics unusual for them?

It seems to us that they accepted our features faster than we accepted theirs. The screenings of domestic films at the JSFF in Tokyo are more attended and there are very positive reactions to the attitude of people from the Balkan towards life and family. There is an obvious interest in the specialties of the local cuisine, which are immediately sold out, and then enjoyed with a Japanese band performing well-known Balkan songs. There are sometimes certain disagreements in the work and process, but from our experience, in Japan there is understanding and tolerance for possible contradictions. However, the very fact that the members of the team from Serbia learned about some local songs from their Japanese collaborators speaks best of how much they like this culture.

4. The topic of the culture of diversity was one of the important segments of this year's festival. Cultfrontrations is a segment that also takes place within the European capital of culture, Novi Sad. Can you tell us more about that collaboration?

We believe that this format of the festival, which focuses the works of two cultures on a given topic, was the reason for establishing a beautiful cooperation that has been going on for years. In addition to supporting this year's event, the "Novi Sad - European Capital of Culture" Foundation and the EU-Japan Fest also supported the research trips of our members in order to better prepare for the JSFF. With this topic, we do not want to point out mutual differences, but we try to learn from each other why it is so and how to overcome prejudices.

5. You brought very interesting guests again this year, can you tell us more about them?

With the support of partners and friends of the festival, we managed to bring seven guests from Japan and two guests from Europe, and we are honored to have achieved a nice cooperation within the region with Duart Platform and Sanja Drakulić, who was also a guest and one of the jury members.

As I started with the ladies, the recognizable face is KINO, a choreographer originally from Japan who built her career as one of the successful participants of the British TV show "So you Think you can Dance", then there is Noa, the front lady of the Japanese rock band 101A and JSFF co-founder, whom the audience recognizes by the cover of the local song Daire by Smak, as well as Natsumi Yagi, who presented herself with an exhibition of paintings. The festival was also attended by representatives of the Yomiuri TV Corporation, one of the largest in Japan, then the director Masato Ozawa, as well as our neighbors from the Czech Republic and Slovakia, the wonderful actress Hana Vagnerova and the producer Rudolf Biermann, who in the course of his rich career had the opportunity to stay in our area.

6. You are an actress, artistic director of a festival and probably something else in the film industry. How do your colleagues in Serbia view the fact that you are all of these two or three professions at the same time? Does it hold you back in some projects, or do others hold you back and why do you think that is so? Do you have an affinity for anything else, direction, production?

It all seems more glamorous than it is. It is true that it is a lot of responsibility, but above all it is an area that I want to appreciate through this engagement. I think that many in the industry with whom I work on the film do not know that I am also in JSFF, and again, I hope that it can only be a new platform that gives us more opportunities for contact and cooperation.

There are moments when I sometimes have to choose a role or some urgent activities at the festival, maybe it cost me some nice projects, but I try not to think about it too much. I am interested in the whole industry inside and out. I have already tried my hand at production in several projects, including the documentary film "Delayed Flight". This is a sphere in which my acting experience and the organization of the festival helped me a lot to be more adaptable and increase the efficiency of solving problems.

7. You are a frequent participant in numerous festivals, both domestic and the majority of international ones. What is the reason that you visit them to such an extent and does it really bring results in your business?

My professional progress, development and vision of JSFF are due to visiting important world festivals. Tokyo, Cannes, Berlin, Venice, Karlovy Vary... Every festival has its own value, from the program to the connections that last. What leaves the strongest impression on me after every festival experience are new acquaintances and new business opportunities that magically happen just then and in the best way. Many of the guests that the audience could see at the 9th JSFF, I met on those great trips.

8. The financial part of the festival is never easy to close, how did you manage it this year? How do people from the economy in Serbia react to the fact that you have a Japanese-Serbian festival, and how do people in Japan or other countries of the world react?

It took time to gain the financial and moral support of all partners and friends to whom we are immensely grateful for recognizing the uniqueness of the festival and the cultural exchange to which we have been dedicated for years. In the most difficult circumstances like the pandemic and other crises, the JSFF team showed perseverance and motivation to keep the festival going without interruption. We believe that the format of this festival contributes to bilateral relations, which business representatives in Serbia and Japan know to appreciate. This is reflected not only through the valuable exchange of authors and artistic achievements, but also through the interconnection of cultural institutions and corporations from the field of business.

9. Your festival also has its own Japanese version. Do you manage to bring people and what are the reactions after such trips and socializing, movies?

We were very lucky to do a festival with a country where artists invest in themselves. I say this because in the past, when our possibilities were much more modest, authors from Japan visited the event on their own initiative and with their personal involvement helped to learn more about it in Japanese auteur film circles. Of course, a lot of this is thanks to our Japanese partner Noa, who, first of all, maintains a very orderly and active communication with the authors in Japan. This entire ecosystem also gave us access to quality authors. Many of our earlier winners with debut or short films can be seen today at the biggest screenings such as the Festival in Cannes.

So many different films were shown in this year's selection!

We opened this year's edition with the drama "Aristocrat" by promising Japanese director Jukiko Soda, which follows the life of two friends through class differences, and that film also won the "Open Roads Await" by Toyo Tires award, right behind the first-placed film "Celts" by Milica Tomović, awarded "IGNITE YOUR BLUE" by Toyo Tires with an award in the JSFF CORE Feature selection. The decision was made by a jury; Hana Vagnerova, the main actress and co-writer of the film "Borders of Love" (awarded for the best debut film in the International Selection), Rudolf Birman and Takuma Yoshida, who were also guests of the festival. I would like to point out Masato Ozawa's Masterclass, as well as the "Overseas - co-productions and distributions" panel where, in addition to representatives of Telekom Srbija, representatives of the Yomiuri TV corporation, whose production produced the comedy THE WAY OF THE HOUSEHUSBAND: THE MOVIE, which was shown, spoke revue at the "Japanese Movie Night" closing ceremony of the JSFF in cooperation with the Japanese Business Alliance in Serbia (JBAS). The award ceremony was also attended by the Ambassador of Japan H.E. Mr. Takahiko Katsumata, Assistant Minister of Culture and Information of the Republic of Serbia Stanko Blagojević, President of JBAS Goran Pekez, famous international choreographer Kino McHugh, artist Natsumi Yagi and musician Noah, co-founder of the festival. It was great, and now we are preparing for the selected selection in Tokyo from 12-15 January, 2023. See you!

The clown, the actress, the artist, where does one begin and other end? - Interview with Lee Delong By Vanja Šunjić 24-11-2022

Oliver works on multiple levels, and for the actors it is a challenge, but also a positive provocation, to keep up with it. - Interview with Dado Ćosić By Duart News 24-11-2022 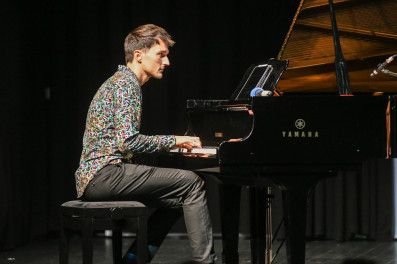 An introvert, but an extrovert in art - Interview with Ozren K. Glaser By Mihaela Crnko 14-11-2022

The future of theatre and film is in bringing the stories of all those who have been marginalized - Interview with Adrian Pezdirc: By Vanja Šunjić 07-11-2022