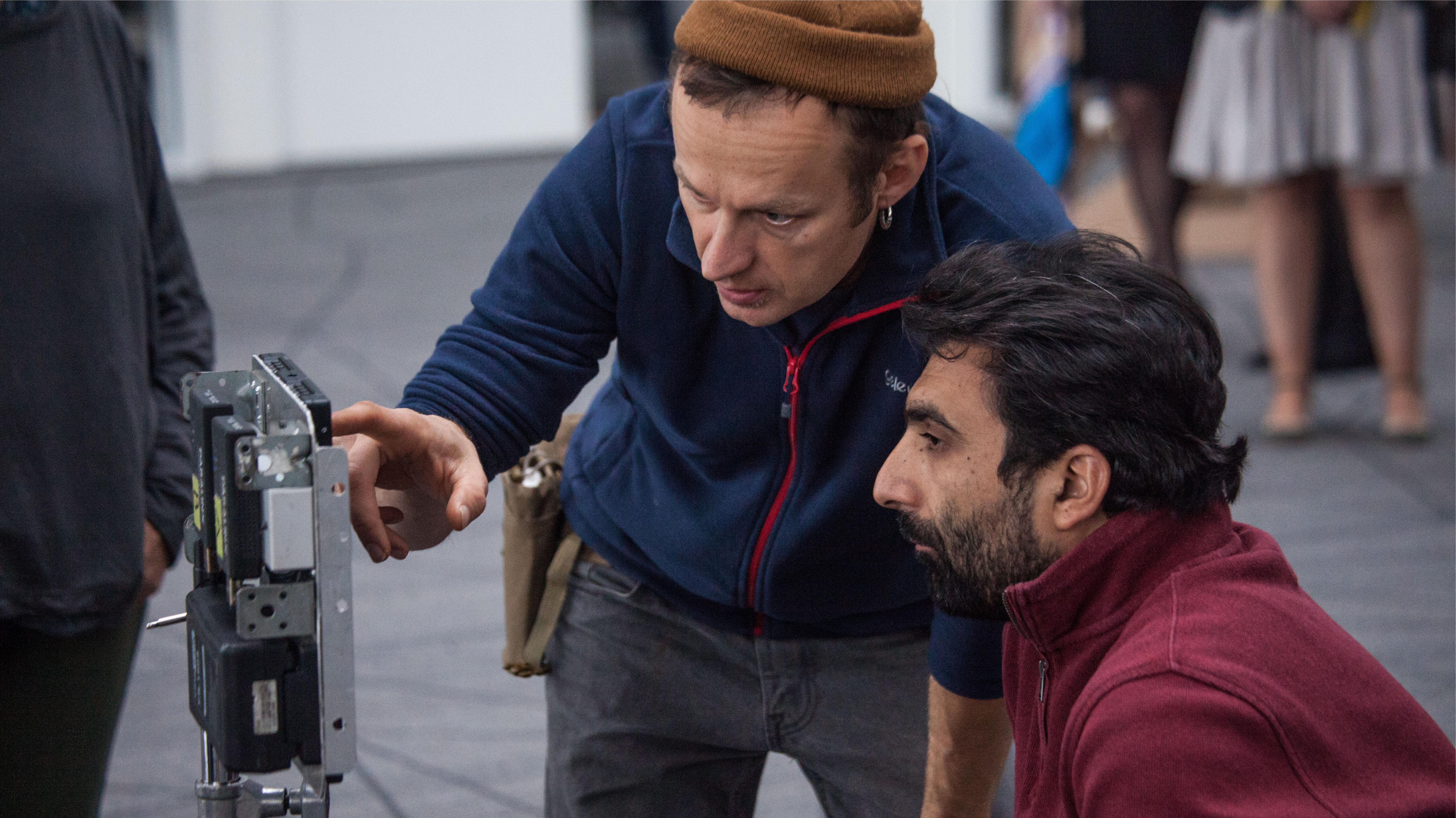 Jivan Avetisyan is an Armenian film director, born in Gyumri, raised in Artsakh and currently based in the capital city of Yerevan, Armenia. His lifelong dream of storytelling, chronicling history, and putting Artsakh on the world map has been realized through the art of filmmaking.

His first feature film, Tevanik, has been recognized in over twenty international film festivals claiming over twenty awards. His next work The Last Inhabitant was screened at A-class international film festivals including Shanghai and Venice and was considered for the Best Foreign Language Film and Best Original Score in the 73rd Golden Globe Awards, lastly being licensed by HBO Eastern Europe. His latest work is 2019 film Gate to Heaven that is making its round in the festival market. Besides his work as director Jivan is co-founder of "Fish eye Art" Cultural Foundation in his home country Armenia.

Duart crew had an opportunity to meet and do an interview with Jivan at this years 70th edition of Berlinale where he was part of the Talents programme.

By seeing your films I find it rather important to start this conversation with a question what is your earliest/ dearest film-related memory?

I would definitely say my first feature film, Tevanik, which is a three-part movie; The first part is about a harmonious family in which Little Aram carries the tragedy of his separated family and in a day, his entire childhood ends. The second part of the film centres on Astghik. Peace turns to war and she loses her friendship, her love, and her idol. The third part of the film tells of 14-year old, Tevanik, who becomes part of a war that changes him forever. Tevanik tells the life story of me and my friends who have lived through the war as teenagers after the fall of the Soviet Union.

War obviously plays a central role in your films, why?

I don't think there is a greater crime than war. It needs global attention as war destroys the social and economic welfare of a country and more so it destroys communities and families. Yes, I come from a generation that was raised during a brutal inter-ethnic war of Armenia – Azerbaijan in the Caucasus in the early 1990s. And when you experience war, the effects of war never leaves you both emotionally, psychologically, and sometimes physically. You are constantly reminded of the pain and grief when you re-live those moments. I feel a sense of responsibility to my homeland of Artsakh (Nagorno-Karabkh) and Armenia. Artsakh speaks the truth about the Armenian identity due to its ancient history dating back to the 5th Century. The people, including my family, have endured over 100 years of genocide. The film is not only about a child who is a victim of war but also about a strong nation who has been able to uphold its identity even during the most trying times.

Do you have some deeper intention with this topic choice?

Yes, I do. I believe that I am the voice of the 150,000 Armenians who live in Artsakh. Through film, I am able to take Artsakh to the world and bring the world to Arstakh. It has a very bright future. I firmly believe it and with film, I am destined to do just that to help Artsakh continue to grow and flourish.

Would you consider switching topics?

I already have as my films include other topics such as friendship and love; faithfulness and fidelity; one’s dreams and wishes; belief and religion; sin and murder; The war is just the epicentre of all these true matters that any person can endure at any moment in their lives.

How do you acquire stories for your films, they all seem as they are focusing on the individual in a time of universal despair, so what makes one story a bit more significant for you than the other?

I can’t necessarily say if one story is more significant than the other because most of the character’s story has some type of truth behind it. These are real stories that have actually taken place one time or another. When you have a country filled with thousands of years of history, culture and religion, you are bound to find real-life stories. And stories are told with different perspectives but at the end stories are generally concentrated on one person’s life, making it easier in creating the characters in the film.

I found it rather interesting that your films open up with you feeding us information about what we're about to see. Why is that? Is it maybe to get the audience ready for the chaos of life they will see or because you believe they don't have that much knowledge about these topics you are talking about?

Yes, you have observed correctly. It is true. First of all, I would like to mention that my audience is mostly foreigners who perhaps are not well informed about the Artsakh – Azerbaijan conflict. Therefore I try to tell the backdrop story through my films with sensitive means to draw attention to the conflict. But if you dive deeper into the story, you realize that there is a spiritual world, inner philosophy, symbolism, and ideology hidden in the film. For example, when we start the film with the Golden Rule in The Last Inhabitant, you read: “So whatever you wish that others would do to you, so also to them”. This is a hint to the audience about the two lead characters that are desperately trying to save their own daughters from their agonies by helping each other to achieve this mission.

A constant element of your films is a village setting. Can you explain a bit more how and why did it come to be?

The scenes of my two films Tevanik and The Last Inhabitant take place in rural villages about 20km outside of Stepanakert, the capital city of Artsakh. The Khachmach village, mostly shown in The Last Inhabitant, is where I was raised since I was two years old. The houses used in the film belong to my relatives; one actually belongs to my uncle. In this village is where I grew the passion for filmmaking and this is where I dreamt of making a film about Artsakh one day. A village has many stories, as the villagers know who their ancestors are and where they came from. The stories are passed down from generations on end. Moreover, its natural green landscape gives a strikingly picturesque appearance, captivating a filmmaker’s dream to film Artsakh as the backdrop for cinematography and story.

Isn't there a bit of irony, on one side having nature on the other humans and their constructs of destruction?

Of course, it is a bit of irony but at this time a little complicated. We have been gifted with a beautiful life with pristine nature but yet as humans, we decide to destroy that nature. But in this case, nature is part of my homeland and the homeland defines my identity. I look for that peaceful resolution every day. In fact, I myself have chosen the path of bringing awareness to Artaskh through Art rather than war because I truly believe war is not the answer to a territorial dispute.

"Fisheye Art'' Cultural Foundation is a producer on all of your films, can you tell us a bit more about them, as well as your relation/collaboration with them?

The Foundation’s mission is to create cultural projects, particularly films, and its beliefs and values are based on universal human values. It also aims at creating high-quality films that have an emotional-cognitive impact on both the Armenian and Foreign audiences. My partner Masis Baghdasaryan and I founded the Foundation, and since it’s inception, we have collaborated in joint ventures with National Cinema Center of Armenia and Lithuanian Artbox Production House and produced three feature films Tevanik, The Last Inhabitant, and Gate to Heaven together. The Foundation is currently working on two other projects with its four crew members including Narine Voskanyan who has taken on the Scriptwriter role on our next feature film project Revival.

So what can we expect from your next work?

My next film project, Revival, is in its development stage. I have been working on this project with my team for over a year now. I can proudly say that I was accepted at the Berlinale Talents 2020 with Revival, and Deutsche Welle also selected me as a talent for an interview in regards to my films. I am also working with my team on another film project, The Black List. It is also currently in the development stage. It is based on a true story of a Russian-Israeli travel blogger, Alexander Lapshin, who faces a political scandal while visiting the forbidden territory, Artsakh, in the caucuses. Both projects will enlighten viewers with characters who make a mistake and in a matter of a split second make a life-changing decision.