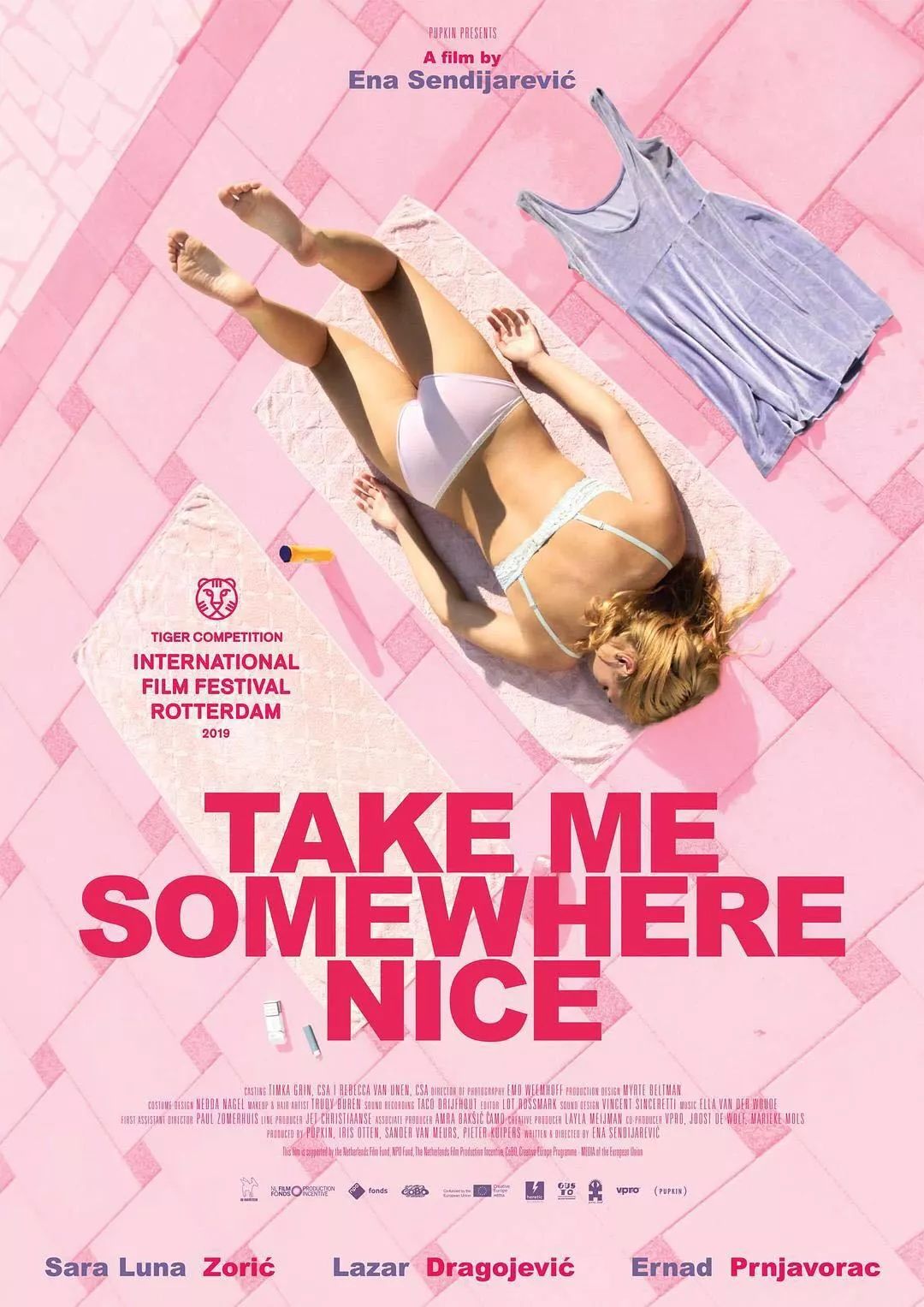 The beauty of hyperrealistic, kitsch stylised world we are living in.

A neon blue curtain is slowly moving in a still frame while the electronic beats are following it in the background, from slow and gentle to faster and higher. Cut. A mother and a daughter, in tacky, faded neon blue swimsuits are sun baiting in their minimalist square-shaped garden, somewhere in the Netherlands while practising common useful sentences in the Bosnian language. All of a sudden, a neighbour, in a caricatured manner, runs his head through the hedges and asks the women for their summer plans. Words like quirky and unusual would be an oversimplification of these opening minutes of Take me Somewhere Nice by Ena Sendrijarević, a Bosnian born director currently based in the Netherlands.

As daughter Alma - starring Sara Luna Zorić  - answers the neighbour, we get the basic premise of the film. She has decided to visit her sick father and spend a summer with him in Bosnia. The only problem is when she comes there, here cousin Emir - starring Ernad Prnjavorac - and his best friend Denis - starring Lazar Dragojević - have way better things to do than to take Alma to Podveležje to meet with her dad.

Take me Somewhere Nice,  is a stunning and elaborate visual spectacle filmed in 4:3 aspect ratio. Almost every shot of this film resembles an Instagram profile/ Tumblr blog of common millennial. Director Sendijarević opposes the blend, grey socialist architecture and wasteland landscapes with pastel pink and blue dominant fever-dream of a hipster girl hooked into some of the most common pop indie filmmakers, like W. Anderson, N.W. Refn or Y. Lanthimos. All these contradictions are done purposefully, to bring the viewer closer to a mental state of the film's protagonists.

When it comes to a film narrative, it plays out mostly in a poetic way, combining the elements of road trip film and angsty teen coming of age drama. Even though it is hard to say that there are a goal or a place where the film is heading, in the traditional sense, the representation of the two opposing societies, in a clash, is obvious and is done splendidly. From the first image of Alma and her cousin Emir, one next to another it is obvious that they have hardly anything in common. When they first speak to one another, we can even notice lingual differences, between the two, even tho they are using the same tongue.

The uncomfortable bizarreness of Balkans

Maybe the best-shown difference between Alma, who has been raised in the Netherlands and Emir/Denis who was raised in Bosnia is the way the characters are open-minded/close-minded to the things that surround them. While Alma always takes action and is openly argumentative about everything that happens, boys, on the other hand, are stuck in a conservative, rotten nationalist mentality of Bosnia where they think there is nothing that can be done, in any situation they get into. This is best seen in the first act and the procrastination of the road trip because they just happen not to have time, resources or will to do it, while the opposite is obvious.

The brilliance of this film lays within the Sendijarević's desition to confront every day, sleazy, common situations of Bosnian society as well as Bosnian diaspora with an artistically elevated, surroundings, which in combination reveal the truth about the hyperrealistic, kitsch stylised world we are living in today. The director doesn't hide or limit herself to some kind of comfort zone, she openly provokes by showing us all the small things we would like to keep commonly hidden. The politician sleazebags are highly motivated to pay their way to bed with underaged girls, being horny and abusing drugs isn't foreign or tabu to teens and brainless muscular idiots are ready to kill somebody who just looks at them in a wrong way.

Truth to be told, Take me Somewhere Nice is 91 minutes of artsy, road trip elaborate mess that isn't for the most common film viewers. This is rather film for the audience that enjoys new and unconventional ways of storytelling and the ones who are ready to see banal imagery that manages simultaneously to provoke and make laugh.