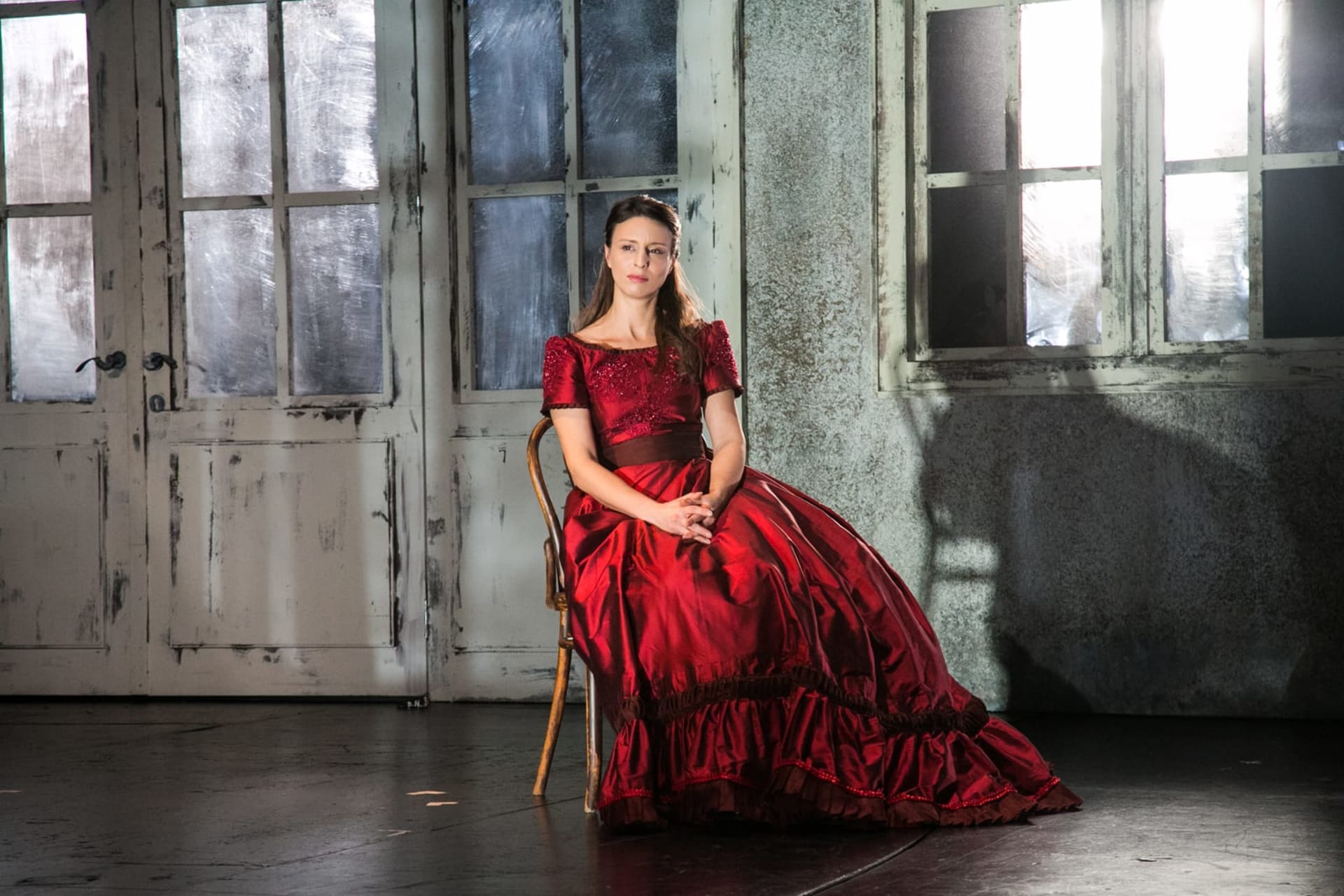 HNK's production of a Russian Classic

There is a kind of gripping melancholy that rages through the Russian man. From Akhmatova and Tsvetaeva to Gogol and Chekhov, theirs seems to be the mastering of suffering, of a soul entering a realm of emotional condemnation and, at the same time, the ravaging fire of their blood as the misfortunes are shaped on the verge of social ruin, unrequited love or gambling debts. With the profound smell of stale sweat, naked rooms ate by a humid Peterburg dusk and the warm lisp of freshly printed money notes still rushing through the long night in the cabin of the train, up comes another production of The Idiot by Fyodor Mikhailovich Dostoyevsky, this time staged at the Croatian National Theatre.

Vasily Senin shaped up this demiurge of humanity in an emptied saloon with roughly scraped walls, as the moon shines either shown by gentle light thorough behind patched-up windows or, indeed, is held within us like a mighty scalpel pointed towards the sources of our own envy and dissatisfaction. Completing what might be his Trilogy of Suffering, after The Seagull and Anna Karenina both staged with ZKM some years ago, with considerably different acting energy at disposal, Senin´s dive into The Idiot is ultimate, an ultimatum of goodness that we might find extinct. Opening immediately in the home of Nastasya Filipovna Barashkova (Jadranka Đoković), facing Trotsky (Goran Grgić) and his never-to-be-extinguished hand over her life, now coming over as a lofty marriage proposal. Set to have her groomed and warmed into a role of upper-class wife to Gavril Ardalionovich Ivolgin, Ganya (Dušan Bućan), General’s assistant carrying the mark of a greedy career-maker willing to “run over the city for three rubles”, Filipovna shows her gratitude to the makers of the world by making her will firmly set in her haughty distance. She is not to be melded by the money nor is she interested in blind abeyance. In the colorless room with nothing but the light and some open doors holding the unity of space thorough the play, Đokovic is a marbled figure of grace and bitterness. Hers and hers alone is the suffering of a woman with a mind amongst the men who try to substantiate her through owning her body. In black and yellow she stands, glistening in mock pride and demeanor. She is all-consuming, effervescent and is found at the cross-section of both of trajectory paths working up the narrative within two main courses. Headstrong, with wolfish hunger of obsession Parfyon Semyonovich Rogozhin (Bojan Navojec) here menacing and painful in his adoration turns up the birthday celebration of Filipovna into a payback to Ganya, a lashing out to the gentry in disarray and flaming of the romantic agony due to die in more than one way by the end of theatre’s hours. Most importantly. Senin’s Mishkin in the hands of Luka Dragic is a warm and distant guest even in his own life, it would seem, existing on the child-like trueness of his approach and open-mindedness that struck him sideways with the inability to track the city gossips.

Following a difficult dramatization layered by overlapping patches of emotional traumatization whilst mapping a slow-paced rhythm in the face of events unfolding in two domestics, Myshkin lives a double, ghost-like manner of ultimate ground zero. His is the opening of all things pure in estrangement, making him more curious about the way of life he is destined to be a witness of. But even this grace has been a by-product of his long stay at a rehabilitation center in Switzerland and now the drums of the northern blood have been boiling just long enough for him to be taken away, first in love and then in death. Even while meeting three sisters, Alexandra (Olga Pakalovic), Aglaya (Luca Panic)  and Adelaida (Iva Mihalic), his experiences are colorful but still otherworldly in their thirst and confinement. The most of space belongs later on to Aglaya, pointing the unmatched rivalry with Filipovna for Myshkin’s attention. Her spirited acts colored by revolution grasps the nineteenth-century turnabout like a nice miniature painting, but she is out of her depths as a character when opposed to Filipovna’s trail of misery and visceral bloodthirst with which she meets the world like an archetype of destruction. Her absence, equally as Karenina’s, is acute as much as it is a malady to everyone, her presence exuding nothing but condemnation. Would we not be right to find Filipovna a sister and an equal in Filip Latinovizc’s Bobochka, almost the same in her epilogue, as she proclaims “When I met (Filip) everything has already happened to me?

Now, Myshkin sees her, soul to soul, with sadness in her eyes. What can she do but run? In a world of wolves, every tranquility is but a trap, every consolation a betrayal, every honesty a possible ushering to face our own mistakes. The worth of mention is Olga Pakalovic’s obedient yet disarming episode of a shy and discreet Alexandra at Myshkin’s first appearance. Perhaps one solid remark would be that the majority of characters were framed almost from the start into rapturing types. Following the need to presented in an opulent dramatization, most of them embodied well the image-like quality of what the novel brings about in full depth, the essences of humanity at is waking and waning point. (A fair warning to anyone doing a book report and hoping to cheat and see the play instead- do so, but read the book, definitely.)

As Camus had been working on The Possessed, he proclaimed no other writer equals the accuracy of Dostoevsky when it comes to staging introductions, and whoever has read any of his novels may adhere. Senin’s attentive array began with the scene and its bereft nature only to be better acclaimed as transitory as a mental instrument helped by the appearance of Filipovna. It is a decomposition with mirroring montage of episodes from and of the quality of prose that cannot be found anywhere else. The Idiot hides like a metaphore or a genetic sample in all of us who are afraid of our own pain, who are afraid of our own suffering and who are shaped by the decisions that keep backfiring at us in order to provoke us to see the truth. A single red table igniting the burning questions of love, consummation in a menage-a-trois, fidelity and confessions has been used as a perpetual moveable feat, in the end perhaps reoccurring as subconscious desire, a malady. Amongst many of the glass windows hanging clamorously opens up the second part after the break, solidly undermining the clash worn by the protagonosts from the start. The material world with its laws of burning injustice arranged marriages and interchanging positions after acquiring fortune are nothing compared to the overwhelming exactitude of the soul finding its peace. The accuracy of production lies with some barely distinguishable purity of human suffering. Myshkin tells a story of a convicted prisoner who survived exectution (alluring to Dostoevsky’s exile to Sibiria), of an ordinary peasant woman being “as happy as God welcoming an honest prayer as a mother is happy seeing her firstborn smile”. As far as the dynamic is concerned, the settled pace from teasing dialogues into the intimate misery of Rogozhin and Myshkin at the end, paired up with Aglaya’s marriage throws this hard-to-conquer structure to its quick end. Though from time to time almost naive, this is a project worth respecting as it had tried to sum up the compass of a soul from Hell to Heaven, knowing the latter is out of reach. With many twists left in the suggesting nature of directing, insinuating at the novel’s array of character’s comings and goings, it ends on a crushingly beautiful note, as it only may when done in Russia. When hearts had a way of eloquence the morning still met beautiful white corpse, a splash of water reflecting in the old windows as two lovers share their death dance, a knife with some blood and a russian song echoing the loss under the moonlight. Then, applause, then our own cruelty and mistrust to shape the windy night of January as we go about our lives, hundreds of years away from the time when men were brothers even when they loved the same woman.