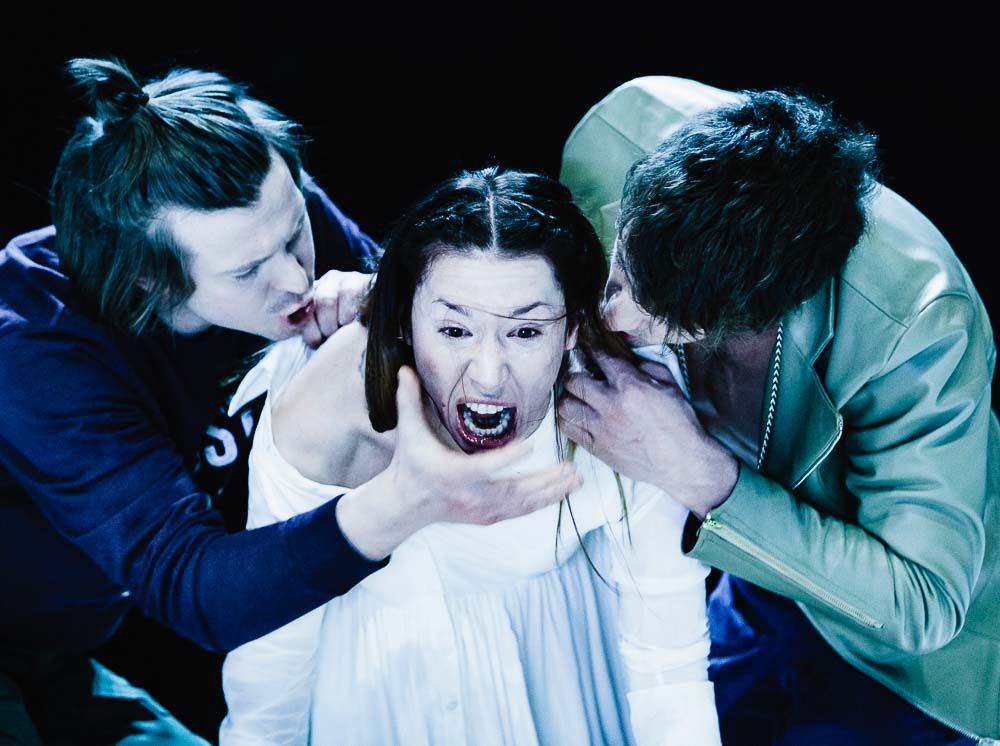 Titus Andronicus - From Rome, with love by Igor Vuk Torbica

Review of a theatre play set up at Zagreb Youth Theatre

There are no curses, only mirrors held up to the souls of Gods and Mortals

Theatre, when done earnestly, is a profoundly human language. It is one of the very few hideaways where the mind can in full capacity experience the fleeting hurt of finality set in light and motion,  a drowning in and out of hopelessness in a choice, an act of defiance as much as an act of liberation.

In Kurosawa's Throne of Blood an arrow is shot, seemingly out of nowhere, cleanly through the throat, blood spurting out. The utter force of that which remains -a disengaged abyss looking back to the choices rearing to undermine the ruling logic of the kin, the protection of compassion chilled in the name of civilization-such an act has been masterly put by Zagreb Youth Theatre (ZKM) with Igor Vuk Torbica's Titus Andronicus. The guttural quality of the entire performance, the totality of evil taking root, it would seem, in our own blood and bones, the blankness with which this unutterably is conveyed is a thing to revere.

The dramatization is drawing us in from a fetal point, a simple statement by Rakan Rushaidat (Aaron, the Moor) about the play's name suffices as the reading table slowly transforms into the Roman liturgy of elections, summarizing both the dissatisfaction of people and the promises of future rulers. As the "ifs" hang in the air we are perhaps reminded of a similar text by Shakespeare, namely that of Coriolanus. Offering a more matriarchal story of exploit and duty, Caius and Titus are both archetypal but when well-read, complimentary in action. The rigidity is paid in full though Torbica's exploration is less fixated on any identity revolving around our "modern relevance". What is relevant here is the soul mirrored in the earthly choices as breaking points.  Upon Titus’ (Sreten Moktović) return, the demand to rule Rome follows as Saturninus ( Petar Leveric) clashes with Marcus Andronicus (Adrian Pezdirc) and Bassanius (a much to soon departed Robert Budak).  As the lights are blazing over a flat marble surface, the full view explores untimely the prosperous return and the masculinity in its prime. Nature of evil surfaces in servitude as much as it bursts in the drums of Titus’ return. Lavinia (Mia Biondić) is present with her purebred, innate pride of  Andronicus’ only daughter, only to be too cruelly reflected in Tamora (exquisite Katarina Bistrovic Darvaš) with their feminine strength strikingly juxtaposed thorough.

In coexistence with a choleric male, femininity is relentlessly challenged by passivity in exercising power (Lavinia) and the sharpness of manipulation (Tamora). The tension builds upon such breaking, relieving, entering, imploding, thwarting, dismembering, fragmentation-the walls of Rome are torn apart from within, the blood of Rome is desecrated, the reign polluted by a prior enemy, signs are melted and the skies disappear as Rome's most celebrated hero is drowned within his fragile naivety.   Both Lavinia and Tamora are used and risen only as a sequential material in the empire's role, they bring an unprecedented focus on femininity and the usage of female subject/object. The absolution is responding through a simple hammer-flea physicality. We can have faith in our upper hand of revenge but only so long. With feminine characters, bodily reality is displayed along with identity-forming through two sides- wounds and dismemberment.

As with Volumnia counting Coriolanus' scars, so are Rome and Titus, brothers and foes confronted with mutilation made greater by the complete absence of truth. There will be no blood on the scene but the horror of such supreme torture, dismemberment and desecration did on stark white is a new way of point-blank In-Yer-Face theatre. A glistening marble, a clink of charcoals becoming sons fallen in the battle-such ordinary is given to chaos. One will get up, eat its own blood, kill his only daughter, perhaps defend a flea. The sign is a translation of meaning, embodied in different parts of dramaturgy.

Lavinia channels to the utmost questions of identity. As Marcus exclaims to Titus This was thy daughter, with her pristine whiteness accentuating what was left untouched of her soul, Biondic has the captivating loveliness of a sacrifice, suddenly aware of the world's great ways. As G. Wilson Knight becomes, who is she? Who gives her the voice if not her family, also dismembered and half-mad in the storming blows. They are trying to give meaning to her remnants of speech, indeed of her roles as daughter, wife, a symbol of Rome's purity, which bellows further grief. In contextualizing sanity and truth, Lavinia sculpts the meaning passively, through what has been done to her. She becomes the raped one, the desecrated one, the beloved one and the one to throw the House of Andronicus into the final battle. Similarly, Chiron and Demetrius are downgraded to what they have done, by Knight. A murderer and a rapist.

It has been too long since anyone has seen a production with full guts, an orientation is given by ZKM, so the imagery of this despondent saga may find many of its viewers disconsolate. The dark is frightful but so is light if we do not know what we need to do with ourselves. If the theatre is blind and the audience entertained, the systematic rage, transparent automation for destruction will be in the same place, drawing new blood. Alen Sinkauz and Nenad Sinkauz are present thoroughs with musical patterns that round both the physical sphere and the sensory experience in a sound. Their work exists almost completely as a continuous answer, a representation of our conversation with the actors and, indeed, the material on the whole, as the levels of the subconscious are translated into play’s soundtrack. If there is a way to allow an epic theatre to make its comeback into the present time, it should be done with the example of such a production.

Light is life-forming. Nothing in this theatre of total futility is accidental. The Arrivederci Roma song sung by Tamora as Lavinia is desecrated brings about the full circle of Shakespearean mechanism. The wheel has turned and eclipsed one family tree leaving nothing but a mocking choice that will be further deepened by requests made to Titus.  If the only commentary after seeing is a political one, it is such because for a vast number of members it has been a subjective insult. The pointing of the finger, to which we are used to is here elegantly erased through a more discerning appeal.

The soundscape is as much internalized, laid as a map of another actor shaping the full sensorium. The actor´s game is a tale of signs, light, and music there to open the doors for steadfast side-by-side orchestration. It is not scented and there is not a drop of blood to be seen for the whole duration of the play. But, metaphorically, blood will have blood everywhere it can spare it. It is the drawing out of characters that undermines our final collision with the totality of evil. We are our own fathers, our own fires that desecrate the grounds with burning wounds, we are abortive of spirit in our relentless stupidity, we made responsibilities vain by owning up to illusions rather than owning up to the doing. Aaron is perhaps the only true hero, in the end. His actions are justified, then, by the most powerful force of all- paternal love. Before he sets us in the night, the eternal night of beasts, he will ask Where are your children, Rome? Aaron is the poet, in the end, not belonging but choosing to reside in the womb of both evils. As if it were a prophecy, a final remnant of command, something that allows us, in the end, to bend the knees in prayer. The Roman civilization is nothing but an arena of daggers passing in different rhythms. Tasteless and blank, it has been served even as our modern judgment of "Shakespeare is not losing relevance". Better yet, our disheartening downgrade has never abandoned our seeming advance.

This is a bitter pill to swallow. Where are our children? Where is the truth to fight for? Where is mercy? Where is our peace? In the end, they all go in the dark without a stance. 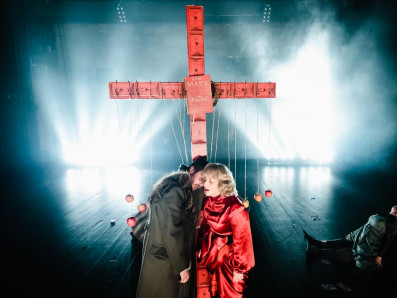 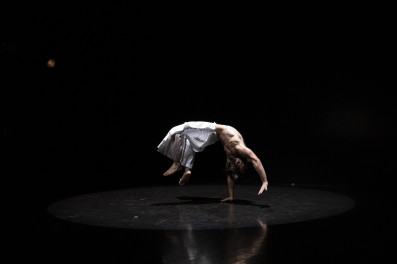 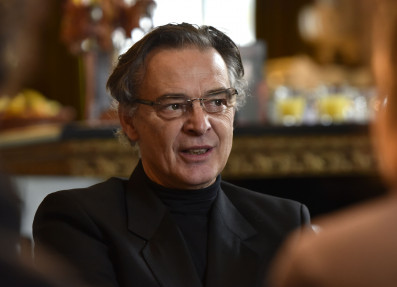 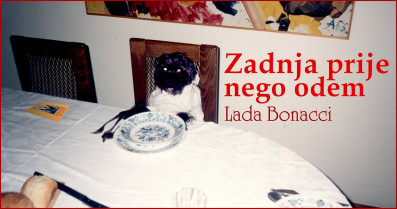