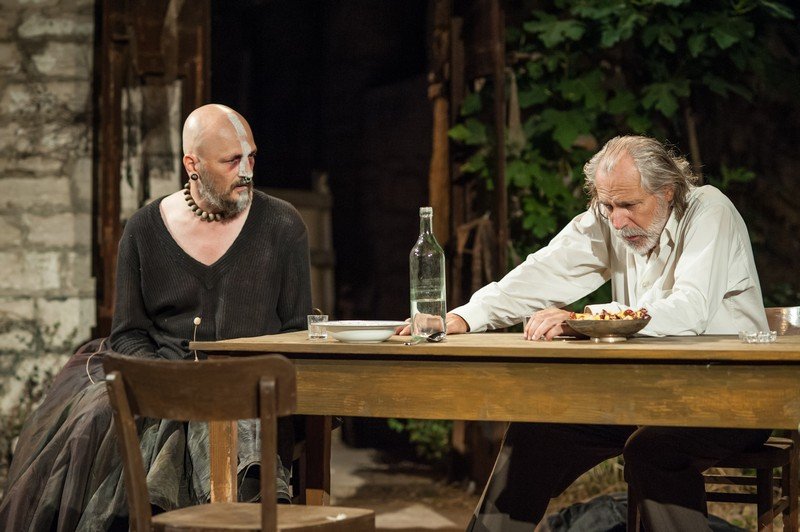 20th season of the Brioni based internationally renowed Theatre Ulys'ses is here!

Coming through a time of two decades, this theatrical ship as the quest for humanity on stage, has presented today its latest programme

Twenty summers ago saw rising of Ulysses Theatre, a Brioni-based theatre breathing life only in the short span between July and August amidst the wild nature of stone and salt in the heart of Istria. Three founders were Borislav Vujcic- Croatian playwright and novelist, Lenka Udovicki-theatre director and her husband, Rade Serbedzija, whose international and domestic acting career is unsurpassed to this day. They have created an artistic space of freedom and demands for excellence they have met successfully in the likes of Goran Stefanovski (Macedonian playwright), Zijah Sokolovic (Bosnian actor and director, due to perform in his latest monodrama on 31st July), Nebojsa Glogova or Ozren Grabaric (Croatian actor, known for his roles in Ulysses as Brecht’s Arthuro Ui, Odysseus and Lavrentius in Shakespeare in Kremlin).

Coming through a time of two decades, this theatrical ship as the quest for humanity on stage, with stars above amidst the ruins of the old fortress, has presented today its latest programme amidst the renewed restrictions due to COVID-19. While it meant having to wear a protective mask and sitting two metres apart, the ease of a homely atmosphere lingered in the bright room of Zagreb’s Lauba, if only due to a direct video-chat with Damir Urban, the singer and lyricist of Laufer and Urban&4.

A MAN IS A CREATURE OF CREATION

Opening with the acknowledgement of man´s creative energy, Udovicki continued to refer to the present situation of frequented isolation as a mean to understand deeply the need for human contact in broadest of ways, ultimately stating the man´s power to create is there to empower us all. Indeed, as the worldwide lockdown progressed in every corner, theatres entered the larger-than-life digital industry, most of them streaming their content weekly. The need for any performative art is ubiquitous and profound and it reveals our inmost being of compassion in its ultimate stance.

Damir Urban (also known as Tiresius in Udovicki´s production of Antigone) referred to his project, The Room of James Joyce, which will be opened by aforementioned Urban´s musical performance. With a precise timetable, various audio and visual elements along with the props, photographs, maps and paintings will be displayed for the visitors. With an interpretational and didactic sense in mind, The Room will also serve as a homage of sorts to Joyce´s life and work, enabling the visitors to leave their mark In the Room, thus perhaps becoming a part of the Room`s life and spirit.

As the tenth anniversary opened with Shakespeare´s own The Tempest, two decades will open with intense sound and fury of Edward Albee´s Who´s Afraid Of Virginia Woolf? The famous on-screen divide of Marlon Brando and Elisabeth Taylor will be embodied on Ulysses´s stage with ZKM Theatre´s Katarina Bistrovic-Darvas as Martha and Serbedzija as George. The play was co-produced with Belgrade`s Dramatic Theatre (BDP), premiering on 29th July last year, with its Belgrade-based opening on 9th October the same year. Critically acclaimed, the play saw its Zagreb dates sold out weeks before three-days matinee in ZKM. Traditionally, the play whose existence is essential to Ulysses´ heartbeat, King Lear with Serbedzija´s larger than life performance as titular king-will yet again wield the storms and thunders on Brioni. Before the season rolls in, a book on Ulysess Theatre will be published, penned by late Vujcic´s son, young playwright Borna Vujcic (known for The Seal, which premiered in 2015. On Brioni and later in Gavella Theatre).

Concerts have always been a permanent mark of Ulysses`s season, and this year will be no exception. Presented by composer David Rocco, The Days of Guitar will see musicians Edin Karamazov, Ivan Kapec, Maja Posavec, Mate and Simun Matisic thorough the days of the season, each of them bringing a distinguishing sound of strings to the artistry of Ulysses.

Closing words belonged to Serbedzija, and rightfully so, as this year will see the reprisal of Miroslav Krleza´s polemical text My Confrontation With Them, first played under the directions of Dino Radivojevic in 1974. Jokingly, Serbedzija said how he had played it back in 1991. later in 2001. at the opening of Ulysses-“ And I did not miss a line after not playing it for 16 years. Now, a few months ago, I sat and went over the entire thing once more- again not missing a line, after so many years.” What remains now is a short wait to 2nd of July when the Confrontation will be seen by Zagreb´s audience, before sailing from Fazana to Brioni.