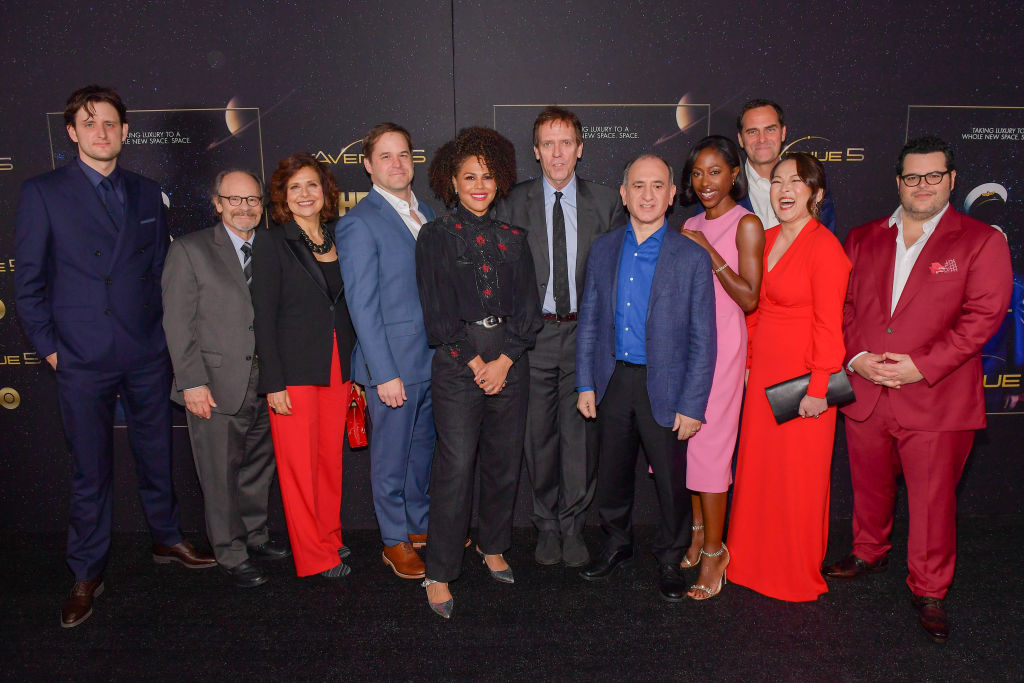 Between 2012, when the last season of House M.D. ( 2004 - 2012 ) was shown, and 2020, Hugh Laurie was rarely in front of the camera. He focused more on his other great love - music. An educated piano player, writer, and actor, Hugh Laurie is a multitalented artist. Most of all, he is an expert in making difficult and complicated diagnoses. Of course in the virtual world of tv series. What Hugh Laurie played and written, a few people know, but House M.D. everyone knows. Admired cynical dr. House decided to cut off his rare appearances on the tv screen at the urging of his friend Armando Iannucci. Showrunner and director Armando Iannucci has been hired on September 25, 2017, by HBO to launch production of the new comedy Avenue 5, whose first season has eight episodes. One year later, August 2018, the casting is joined by Hugh Laurie. He plays Ryan Clarke, the commander of Avenue 5, the interplanetary cruise ship, who has an accident while traveling deep space.

Hugh Laurie is back in a potential HBO franchise!

The crew of the Avenue 5 space cruiser must somehow deal with unforeseen damage on their space cruise ship. A brief disappearance of artificial gravity knocks the ship off course and turns a two-week voyage into a three-year nightmare. At first, all the hope of the spoiled cruise ship owner Herman Judd - starring Josh Gad, is directed at commanding officer Ryan Clarke - starring Hugh Laurie. It turns out that the Ryan Clarke is just a hired cast and knows less about the ship than the crew. Joe, the chief mechanic, and the man who knows how to operate the cruiser ship - unfortunately, he died in the accident. Of all the people on board, the only one who knows how to overcome a crisis is dying. Bad luck. Aside from Ryan Clarke, the man who by supposed to give a sense of security to the passengers is Matt Spencer - starring Zach Woods, Head of Customer Relations for Avenue 5. But he has no idea about anything and knows the least about people, which is his basic job. Among the funny and interesting characters is Iris Kimura - starring Suzy Nakamura, an associate owner of Avenue 5. She barely controls the shipowner Judd, who is completely incompetent in everything. Aside from irritating anyone who is in contact with him. How do you survive even three years with groceries scheduled for a two-week trip? It's going to be a real challenge, right?

If you think of Hugh Laurie as House M.D. - you will hardly be happy after the first episode watched. But life goes on, House M.D. is gone, and we have to come to terms with it. Not a lot of good comedies on HBO, and with that Avenue 5 came a refresh. It is the Veep connection between Hugh Laurie and Armando Iannucci. The creator of Veep is Armando Iannucci, his friend Hugh Laurie acting in the series. After all, the aforementioned couple filmed the comedy The Personal History of David Copperfield, which will have its European premiere these days, 24 January 2020 in London.

Avenue 5's story is such that it can be extended indefinitely. Something like the adored Red Dwarf. It all depends on the reception with the audience. As for the critics' response, Avenue 5 is a welcome refresh on HBO. Eight episodes are not many, and we should expect to get to know the main characters a bit during the first season. A cramped space is full of angry and frustrated travelers who quickly grasp what kind of ignorant people they are dealing with in times of crisis. Elements for a fine, cynical approach to humor as you wish.  Zach Woods' character - Head of Customer Relations is kind of the funniest for now. The person in charge of all the annoying complaints of spoiled passengers is not a person full of compassion and patience. On the contrary, it offends and belittles people more than it does at their service. A kind of black humor that is chronically lacking on big-company programs like HBO and Netflix. They strive to be politically correct, and incorrect humor is just the most interesting humor.