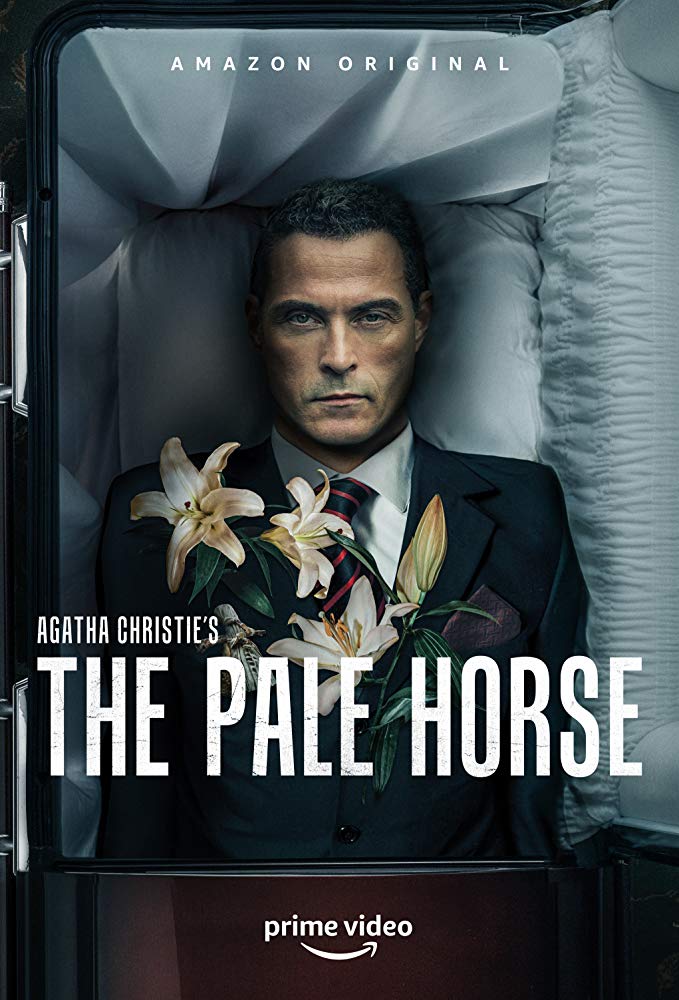 The Pale Horse - A modern treatment of a literary classic

The British are very fond of tradition. British brands are recognizable symbols of the past. From Big Ben to Downing Street. From Churchill to Agatha Christie. But Sarah Phelps is not inclined to traditionally view the British icon. Although criticism praised her view of And Then There Were None, the excellent 2015 mini-series of Agatha Christie's classics - Ten Little Niggers. 2018, Sarah Phelps has filmed another excellent cover of Agatha Christie's work - Ordeal By Innocence. Interestingly in both, she played Moven Christie, who is not in the latest filming - The Pale Horse. Both of the previous series feature acting legends - Charles Dance from Game of Thrones and Bill Nighy from Underworld. Both series are well received by critics and audiences alike. So why did The Pale Horse irritate British viewers so much? And not just British ones. Most admirers of the late writer’s literary expression are not happy with this latest cover.

Everything indicates that Mark Easterbrook is next to die!

Sarah Phelps decided to modernize the great writer a bit. She took a very famous work. It retained the basic story. Places and the main determinants remained the same. But she changed his characters. It deprived them of the essence and vision of the late writer. Every single character is darkened. The main character, the very good Mark Easterbrook - starring Rufus Sewell, is an unpleasant and rude womanizer. At no point does Sarah Phelps show empathy with Easterbrook. On the contrary, as the series progresses, so does our main character become increasingly hated. His young second-wife Hermia Easterbrook - starring Kaya Scodelario, is a whiner and spoiled pill addict. She is a cold type of person, and of course antipathetic. If the two main characters are extremely unpleasant, what is with the other characters? For example Mark Easterbrook's nephew, David Ardingly - starring Henry Lloyd-Hughes, a high society bum. He lives on loan money and waits for the wealthy Aunt Clemence Ardingly-starring Sarah Woodward, 'suddenly' die, to grab her inheritance. As much as Agatha Christie killed her character's, consecutively from high-ranking British society, she always had respect for them. If not sympathy, then at least respect and understanding. Sarah Phelps has no such vision on the characters of the famous writer. Demystification also includes curses, brothels, and the occult. Agatha Christie didn't avoid adding a bit of spice to her stories. It is The Pale Horse - we would say the Fifth Rider of the Apocalypse, to express an example of the occult addition. The three witches from Much Deeping in her book are links to the natural. Addition to the story. At Sarah Phelps, the three witches were barely touched. They serve not as doubt, but as symbols of a different view of the literary classic. In supernatural terms, Sarah Phelps goes a step further. It introduces the creepy procession of locals Much Deeping, just as if they came out of the Wicker Man film set. She didn't resist to put in the little straw voodoo dolls that people on the death list find close by. Yes, there is a dying list, at least it is taken in its original form from the pen of Agatha Christie.

Police Inspector Lejeune - starring Sean Pertwee calls Mark Easterbrook - starring Rufus Sewell for an interview because his name is on an odd sheet of paper. The list of names was found in the shoe of the late Mrs. Davis. Most of the people on that list are now dead. They all died an apparently natural death. But Mark, clearly alive but shaken and scared - launches his inquiry into the strange event. The investigation takes him to the small village of Much Deeping, where three women allegedly engaged in witchcraft are located. Zachariah Osborne - starring Bertie Carvel thinks the three witches are somehow guilty of the deaths of all those people on the list. Mark does not believe in the supernatural, but the worm of doubt is drawn into it. At the same time tormented by the sins of the past, Mark frantically required the truth, because he is aware that his time is running out.

The shocking end to the story of Mark Easterbrook angered Agatha Christie fans.

Seemingly, the storyline is similar to what we are used to reading Agatha Christie's work. But with Sarah Phelps, as we've said, it's a completely different perception of the characters. But sugar still comes to an end. The last few minutes of the series have generated controversy identical to the last episode of Game of Thrones. How and why? These are the most common reactions of Agatha Christie fans on social media. Of course, we won't do a spoiler. But there is no doubt that you will not remain indifferent. Angered or not at the BBC to disrespect the writer's icon, nothing will be clearer to you. The end leaves no one indifferent. And this is where the difference between criticism and audience is now evident. While criticism praises the courage and innovativeness of Sarah Phelps, the audience is not inclined to see such a resolution of the mystery. As always, the critique is modern, and the audience tends to take traditional, well-known paths. As always, we leave the evaluation of what you saw, if you decide to watch the mini-series - it's only two episodes. That part is for praise. Why make it six to eight episodes when it can fit in two or three? This is where Sarah Phelps should be acknowledged. As far as the series' valuation is concerned, we can say that ABC Murders - with John Malkovich - did the same job better. He modernized but did not change the core of the work of the great writer.