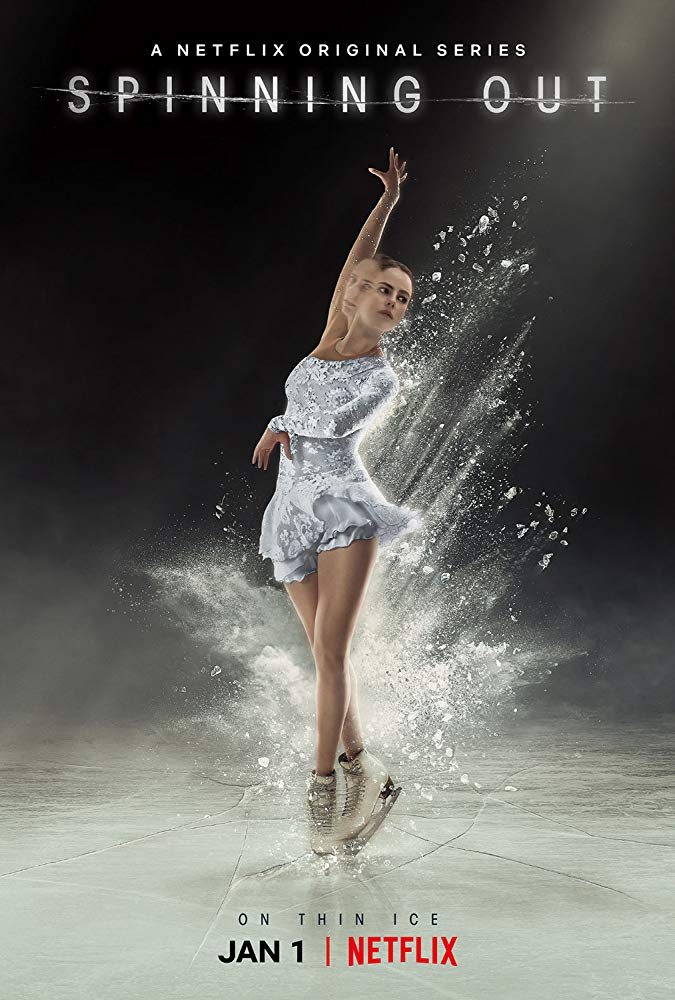 At five A.M. in the icy surface of a skating rink, young Kat lays unflinching by the apparent cold. In a meditative semi-darkness she still oozes complete acceptance, the contours of her body relaxed, seemingly at ease, her lank figure drawn with firmness used to dangerous jumps but now halted to a meditative null. Soon the lights will go on, the daily toil of waitressing will take over and between scarce free moments, greeting the dawn with religious jogging spree, the toil of memory will hit. With the growing dread of abandoning the lifelong devotion to figure skating, pain and grace stand side in the latest sports drama produced by Netflix, Spinning Out

Opening with Beethoven’s Symphony No.7 is Kat’s (Kaya Scodelario) last performance before her fall imposed a serious skull fracture, putting the question of her future abilities on the ice at fading. Some years later she is timidly regaining some last strengths before senior’s test, with forces failingly bent on coaching vocation. Abandoning her older daughter’s leading talents, Kat’s mother Carol (January Jones) is now focusing all the resources on the family’s youngest skater Serena (Willow Shields) whose fierceness strikes across the ring in triple toe loops. The family dubiously presented with shifting attachments reveals some deeper mental images as both Kat and Carol share not only an instilled love for skating but also a serious case of bipolar disorder. With varying degrees of treatment, their adjustment to the reality clashes in pent-up energy giving way at the slightest opportunity. While Carol's habit of demeanor is introduced as brushed up, sideway remarks owning up how much she had lost after giving birth to Kat, her mental scarring sieges with every disobedience.

Through mental struggles of sportsmen and women, the lesser shine of the metal is visible in long hours of practice, unforeseen injuries and different coping mechanism instilled into the daily routine. Often visually helped by flashbacks, one can imagine a childhood full of a healthier diet and a strict schedule, only justifiable by a devotion so deep it leaves every skater devoid of meaning if not exercised until dawn. Indeed, it is this coping with endangered dreams, this fear of not living through something that comes so naturally is the lyrical suffering Spinning out hides partially in the name itself. As Kat puts it, it is "like breathing, I do not particularly enjoy it but I cannot imagine myself not doing it." Everyone who has ever had such a thing, be it artistically driven or more mundane, will understand the gripping of tears when one's soul abandons its sanctuary. As we watch young Carol remembering her skating practice, sounds of Korsakov’s Scheherazade blending with baby Kat's hungry cries, our judgment may become mellow due to the ruthlessness of destiny handing out unprecedented obstacles in the way of these ice warriors.

As Kat is introduced to the possibility of an altered path in pair skating with a local golden son Justin (Evan Roderick), helped by the practical mentoring of Masha (Svetlana Efremova), a former Soviet Olympic Skater, the opportunity grabs her with feverish hands, leading her into a dangerous spiral of untreated mania. Alongside this composition of a second chance for lead actress, the spinning becomes more and more difficult to her friend Jenn Yu, played by Amanda Zhou in a perhaps most captivating role on TV screens. Hiding a serious hip injury that may leave her on the floor anytime soon, her devotion to skating is a bittersweet affair. Yu's family comes up as a middle-upper class ideal of old values and courageous acceptance of more than insecure vocation on ice for their granddaughter, as we see Jenn gritting with each additional training. The friendship, sisterhood, and relationships conjoin animosity, all a one jump away, mingled in a foreseeable, flawed American taste.

However, Samantha Stratton managed to write an eloquent poetic ordeal of modern-day tribulations of sexual violence, body shame,  homosexual inclusion and parental abuse fused at the backdrop of flashing lights and swan-like grace of swiftness. This series may have a less surprising summarisation at its decalogue episode but the supreme awareness of the human being wrapped in choreographic demands, this troubling navigation through a self-deprecating trial to reach the fulfilling pose, these should be some highly sensitive undertones that flame our attention to this streaming newcomer. Arriving silently between trust issues and re-evaluation of one’s true loyalty, namely to the things that makes us feel not only alive but also completely at ease with our demons, Spinning Out is more than just a breakdown of script into sequences of mania, failings and the banality of a familiar bloodshed inside and outside arena. It is in ourselves we must find the necessary torrent of passion acknowledging what we can lose on our way to success and what makes us whole on this journey of getting up when the world closes in with the harmonious sounds, with our legs bleeding inwardly. The grace of body and mind’s edge are here sharpened in loneliness as we watch the last seconds before the symphony begins, spinning its way into an oncoming season 2.