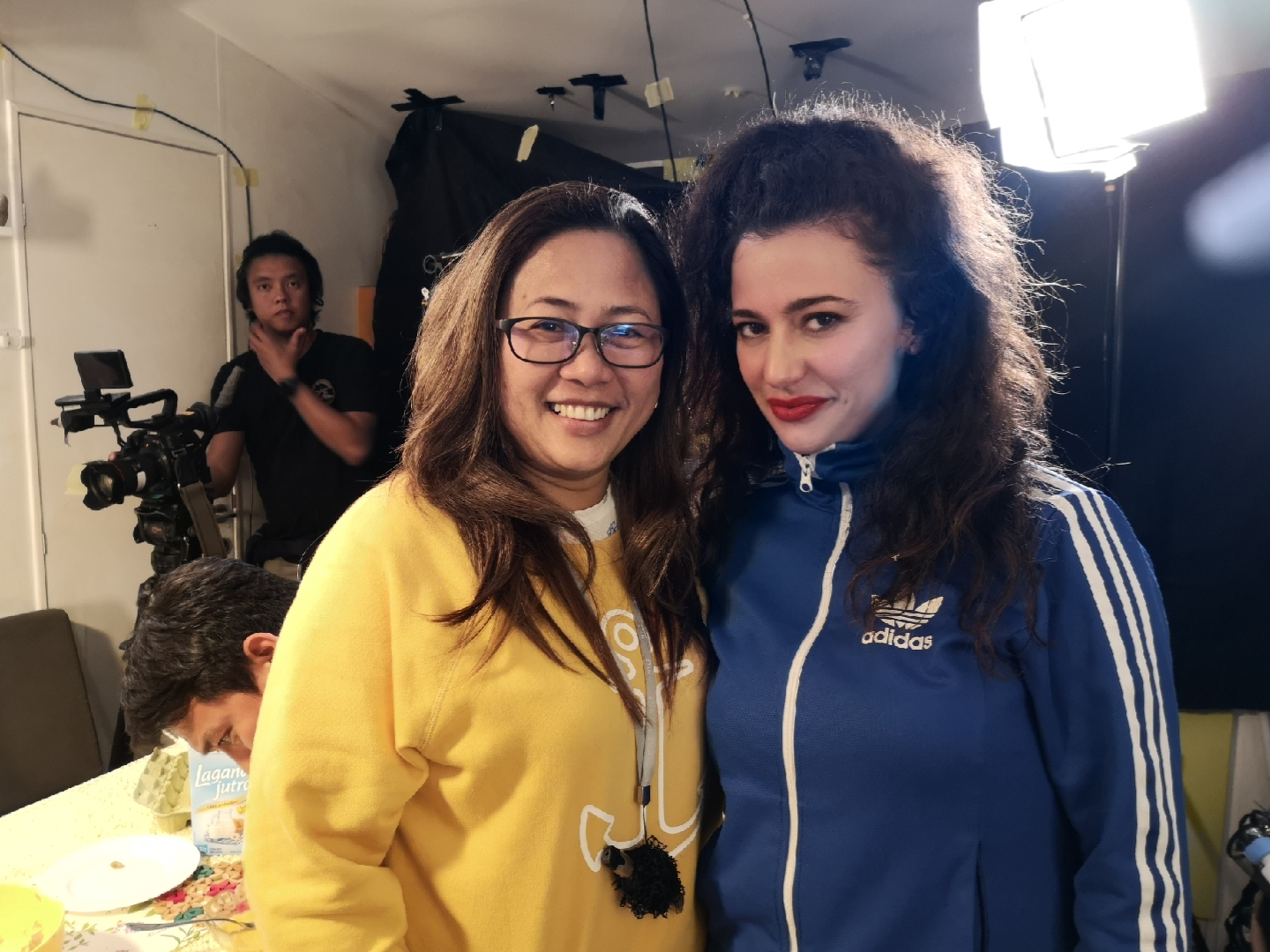 'I don't have a magic formula, but I know that everything I've done so far has been open-hearted, sincere and honest with myself and colleagues.'

Zorana Kačić Čatipović, a theatre actress from HNK Split, became an overnight worldwide sensation on social media just a few weeks ago. It all started when she got involved in the Make it With You, a Philippine TV series that was filmed in the Dalmatia region in Croatia, last summer. When the series aired on the hit TV station ABS CBN on the 13th of January, it had 35 million viewers, which made it the 8th globally most viewed series in the history of TV. We figured out this would be a perfect opportunity to sit down with Zorana and have a chat about theatre, TV, film industry and fame.

Dear Zorana, could you share with us how the collaboration on the "Make It With You" series came to be?

Croatian Creative Casting, an agency from Split, has announced a casting call. I checked in, came and after a few days, I was told to come back to the callback. In the first round, I was only informed that this is a Philippine series being filmed in Croatia. When I was invited to the second round, about 10 Filipinos were sitting in front of me, who put me to test with a variety of acting tasks typical for a casting process. Among them was the director Cathy Garcia Molina, who won the Philippine Oscar just before coming to Croatia. Her two films are the two most-watched films in the history of Philippine cinema. Make It With You was originally intended as a romantic 5-episode mini-series. These were filmed in Croatia and I starred in all 5 episodes. However, the series gained tremendous popularity. The first episode, in the prime time of ABS CBN, was watched by 35 million viewers! In the Philippines, the series was the most-watched in the history of TV and it is even the eighth most-watched in the world. For them, those numbers were enough to start shooting new episodes immediately.

What was the primary interest of Philippine production in filming in Croatia? What impressions and memories did they bring back home with them?

I guess it's because of the attractive locations. It was filmed in Dubrovnik, Pelješac, Korčula, and Split.

They were impressed by our hospitality, openness, and cordiality. The crew kept telling me how wonderful they felt here, how this country was a priceless discovery for them and that they had no idea about Croatia until they came here. We cannot imagine how big of an advertisement this is for our country. Let's not forget that the Philippines' market amounts to 120 million people!

The first episode was watched by 35 million people. Their lead actress, Liza Soberano, who is a megastar in the Philippines and America, has 12 million followers on Instagram. Her boyfriend and partner in the series, Enrique Gil is also a mega-star, co-starring Filipino Brad and Angelina. They even have a common derivative of the name -LizQuen. Filipinos are crazy for them and they cannot leave the house without putting a wig on their heads, a mask over their faces and a hat. For this reason, it was great for them to come here because nobody knew about them, so they could live a normal life. They marveled at every turn that no one recognized them. After the series came out, messages from the Philippines and Japan were constantly coming to me because the series also featured the famous Japanese YouTuber and the winner of their Big Brother, Fumiya Sankai.

Working with some of the most prominent names in the Philippines acting scene was certainly an unusual experience?

When I came to the shoot I didn't even know who Liza Soberano and Enrique Gil were, I had never heard of them before because I was unfamiliar with Philippine film production. They seemed like two normal, young people to me and every day, while taking a break from filming, I was chatting with them about cultural differences, lifestyle in Croatia, acting, acting styles, theatre, film, life in the Philippines and Croatia. The peak of everything was when I woke up one morning and turned on my cellphone and realized by the number of messages that the series had started broadcasting. Messages from the Philippines and Japan were coming for days. In my entire life, I have not received as many messages as I received when the series began airing. It was ridiculous to me, this bizarre realization that millions of Filipinos, who are in a completely different part of the world with an unknown culture to me, know who I am...and that if I came there, they would stop me in the streets and recognize me.

What was the atmosphere like on the set? How different are the approaches of the "Eastern film crew" in comparison to the way they do in Croatia and the region? Have you had a chance to compare their way of working with Western?

The atmosphere was hectic, busy and cheerful. They differ quite a bit in that and, apart from the pace which is 10 times faster than in Croatian production, the variability, and adaptation to the situation are quite normal for them.

Changing text on the spot, changing locations and actors happens in seconds. You have 3 replicas in a pink dress in the kitchen, and in the next moment, they give you another 15 replicas and put you on a boat in a lifejacket because that is what came up to their mind at that moment. The director of the series tried to communicate our customs, and she would often change the scenario to more closely reflect the mentality of Dalmatians. Thus, Filipinos were learning how to play picigin, how to dance like people in Split do, whose steps they learned in less than an hour before filming.

Language and cultural barriers during the filming, did they exist? How does one professional actress cross them?

They did and they also didn't. They existed, when their film crew was making the general plans - I had no idea what they were talking about. But as far as acting was concerned, I was acting in Croatian and English and I felt a lot more natural acting in English. If you asked me why. I wouldn't know what to answer (laughter).

In recent years, there has been a growing trend of regional actors (Zana Marjanovic, Goran Visnjic, Muhamed Hadzovic) in high-budget world productions, both on the series and film. Do we have talent "for export" or is it something else happening there?

We have a lot of talented actors, for sure...filming in Croatia is mostly popular because of the beautiful and cheap locations, which is great for us because, of course, it brings us money. Film tourism has experienced a real boom, just mentioning Dubrovnik where Game of Thrones, Star Wars, etc. was filmed. Croatia is becoming recognized worldwide for its incredibly popular high-profile film projects.

What do you think it takes for local actors to break through the borders of their country and region? Would she be willing to compromise and what (relocation, travel ...)?

All it takes is courage. I'm not afraid of anything and love it when something unfamiliar and positive drives me out of my established rhythm. By nature, I'm open, curious, and ready to do anything if I 'feel' that the time is right. I am intuitive and always let an inner feeling guide me through life.

In Croatia, especially in Split, you are better known for your theatre career. Did this collaboration hinder any new foreign or domestic TV/movie opportunities?

Hopefully, it will, it's too early to talk as the series just came out recently. I would like to go to the Philippines as soon as I finish my commitments at HNK Split, my main theatre - if those commitments ever finish (laughter).

I play a lot, I go from project to project, there are always some reruns. I am currently doing a Bambina musical with Krešimir Dolenčić, which came out on 14th of February, on Valentine's Day. Also, I am performing in the plays Lapland, The Imaginary Invalid, The Crucible...

If you had to choose between theatre and film/series, what reason would lead to a final decision in favor of one or the other?

For years I have been solely focused on theatre, but now this is changing a bit as I develop. The theatre would always win, for sure, because I'm in love with the theatre. I'm grateful to be doing the job I love.

From your successful career, which is becoming more and more noticeable every day, what could you advise your young colleagues? What is it that has brought you satisfaction/success in the business you are doing?

I don't have a magic formula, but I know that everything I've done so far has been open-hearted, honest and honest with myself and colleagues. Don't turn down roles! There is nothing worse than arrogant young actors who are just waiting for the lead roles and reject everything less than that because they think they are the ones the whole world is waiting for to get off of Olympus, compared to us mortals. Those usually end up around the theatre, but never in theatre.