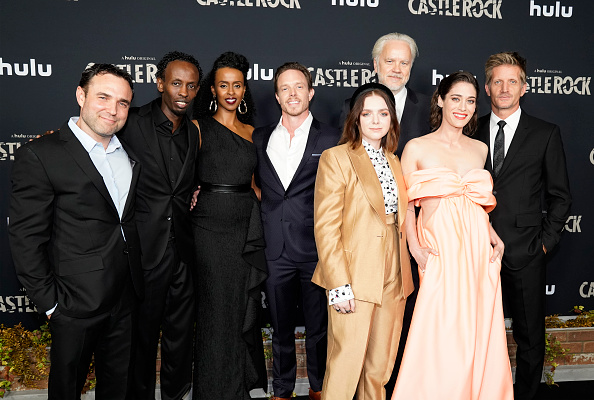 Lizzie Caplan is great in the role of psychopathic Annie Wilkes.

Like the AMC Terror franchise, Hulu also has a horror franchise that is conceptually bound rather than linear. Both series have a completely different cast in the second season. With Terror, the concept is in real personalities and historical events that are enhanced by fiction and supernatural context. With the Castle Rock franchise, the link is, of course, the most productive and best-selling horror writer of today - Stephen King.

In his world of supernatural happenings, the fictional town of Castle Rock in Maine is the focal point of many novels and books. The first season is related to the famous imaginary Shawshank prison, which is right next to Castle Rock. From the first season, we remember Scott Glenn, Sissy Spacek, Andre Holland, and Bill Skarsgard. The New second season - new names, new events. This is where the Witches and Somalis from the title of the article appear.

As she drives through the seemingly dormant town of Castle Rock, Annie Wilkes - starring Lizzy Caplan from Masters of Sex, and her daughter Joy - starring Elsie Fisher - have a car accident. A few days turns into a couple of weeks. Ace Merrill - starring Paul Sparks - remarks two of them. After the conflict, the distrustful Annie wants to leave, but the dependence on Lithium, which is the sequence of events, prevents Annie and Joy from leaving Castle Rock. The haunted town doesn't just let them it out of its deadly embrace. Especially when over 400 years old Witches, executed in Jerusalem's Lot colony, start to rise from the dead. The Witches take on the bodies of the locals, who are getting smaller and do not know what is going on. Between the total re-incarnation of the Witches and the defeat of the people, a coalition between the two adopted Somalis and psychopath Annie is the only hope. Somalis, brother, and sister are adopted children of the local mighty Reginald "Pop" Merrill. They are not very close to Ace, a brother, which turns out to be good, because Ace is at the forefront of reincarnated witches.

Over 400 years old Witches from Salem's Lot, rise from the dead in Castle Rock.

Short content can hardly evoke the finesse of King's phantasmagoria. There is no dilemma for the connoisseurs to the King's universe, this is the ultimate series. Only through the characters do we illustrate connections with the King's universe. Annie Wilkes, the lesser knowers of King's oeuvre, know when we mention Kathy Bates. It's just that Kathy Bates at Misery played a great role as a psychopathic nurse from hell. If I tell you that Lizzie Caplan is probably better in her role as young lunatic Annie Wilkes, here's your first reason to watch the second season of Castle Rock. Pop Merrill, played by Tim Robbins? Suffice it to say Shawshank Redemption. This is Tim Robbins' most memorable role so far and King's best screenplay to date - the short novella by Rita Hayworth and Shawshank Redemption. Pop Merrill himself appears as a character in Needfull Things. In Stand By Me, the character Ace Merrill appears. Not to mention everything else, too long a list. Everything in Castle Rock, the first or second season, is connected to the Stephen King universe. Which, btw appears in person in the second season of Castle Rock. As Alfred Hitchcock once before, he must be in a cameo role. This is a way to show that he is personally behind the recorded material. There are also places in Castle Rock that exist only in the novels of horror master Stephen King. In the first season already mentioned Shawshank prison. In the second season, he is mentioned and appears in flashbacks - Jerusalem's Lot, another King's landmark. For the first time Salem's Lot appears in the 1975 story of the same name, it is about vampires. He is appearing again in the now popular 2019, Dr. Sleep movie - starring Ewan McGregor. The second season of Castle Rock even physically features a house from the movie Salem's Lot ( 1979 - starring David Soul ). In the dilapidated house, the Witches have the headquarters to take over the town of Castle Rock under their control.

As for the second season, maybe let's clarify the Somalis a bit more with the title. Brother and sister, Abdi - starring Bakhar Abdi, and his sister Nadia - starring Yusra Warsama, are adopted children of Pop Merrill. Abdi establishes a Somali Center right here in Castle Rock, while Nadia is a trained and educated doctor. Through the series, we see that young Pop Merrill had a soul atrocity from American intervention in Somalia, and his brother and sister, orphans, were his redemption. But despite the very interesting background of Somali brothers and sisters, you need to see Lizzie Caplan as the crazy, psychopathic Annie Wilkes. If there is a Horror Oscar, there is no point in making a list of nominees when the winner is known in advance. Amazing what Lizzie did with the role. I know that Kathy Bates is right in everyone's memory. After this movie, I'm no longer sure who the real Annie is? The one in Misery or this one in Castle Rock?