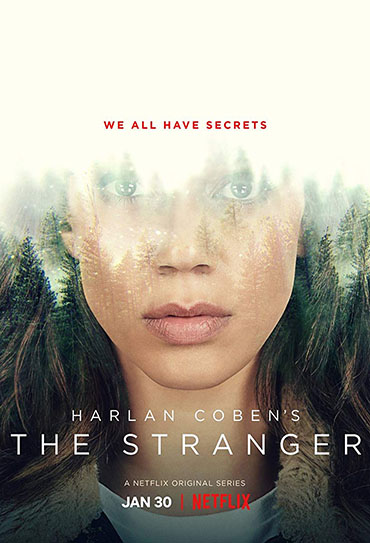 The eight-episodes thriller series on Netflix

At the end of January, Netflix subscribers were able to enjoy the top-notch production of mysterious & thriller entanglements from Harlan Coben. Red Production Company, which worked on the mini-series Safe - again based on the Coben's novel - also produced this tense thriller mini-series. Experience plus Richard Armitage from Hobbit and Berlin Station, it's winning combination. The novel was adapted by Danny Brocklehurst, who is the winner of the BAFTA and Emmy Awards. After all, he adapted the mentioned series - Safe, from 2018. And there he had a stellar casting, led by Michael C. Hall - the legendary Dexter. Otherwise, Harlan Coben stated that this was his story with the most unpredictable plot. That he likes what Brocklehurst did with Safe, Coben proved by agreeing to be one of the executive producers of The Stranger.

Adam finds out the secret that is destroying his idyllic family life, and his wife Corinne disappears without a trace the next day!

The life of Adam Price - starring Richard Armitage, a successful lawyer and respected member of the community, collapses in minutes. An unknown young woman with a baseball cap on her head approached him at football training and whispered a secret he didn't know. The secret concerns his wife Corinne Price - starring Dervla Kirwan. An unknown woman claims that his wife faked a pregnancy a few years ago. Since he already has two sons with her, Adam freaks out at the thought of hiding behind his wife's facade. When confronted with the truth, she avoids the answers and disappears the next day. After the initial anger, Adam realizes that something is not right and moves in search of a missing wife.

The first clue is the disappearance of cash from the box office of a local football club, whose treasurer was Corinne. At the same time, a serious crime is happening. Murdered is a restaurant owner and best friend of DS Police Investigator Johanna Griffin - starring Siobhan Finneran. The murder was unrelated to the disappearance of Corinne, except the same young woman. With the baseball cap. Which revealed to a murdered woman a secret worth £ 10,000. Decapitate of The alpaca, a mysterious rave with the acid in the woods. Naked teenager with severe head injuries waking up from a coma. Seemingly a whole host of strange events and more and more leads lead to a mysterious young woman with a baseball cap on her head. Who is she? What secrets does he reveal? Why is it extorting money from some and not by some? You will find out all this if you look at the eight-part mini-series The Stranger.

The series opened on January 30, 2020, on Netflix. So you can watch all eight episodes in a piece. If you start watching, you'll momentarily 'run' through the series, each episode ends with a cliffhanger. Casting is British, meaning solid. Richard Armitage is excellent, but the others are not far behind. Young mysterious woman, The Stranger - starring Hannah John- Stone from Ready Player One. The very good Shaun Dooley as Doug Tripp, and the good-old Stephen Rea as Martin Killane. Good casting that led Richard Armitage, and the excellent Siobhan Finneran, who we know as the evil maid from Downton Abey.

Harlan Coben is one of the prominent writers of the 'airport-book' bestsellers.

You need to be a fan of English thrillers to enjoy the series. Especially Harlan Coben, who is a bestselling writer, but still not the top of the genre world of thriller production. The mainstream author, regardless of the many intricate situations, and twists will never shock you and leave you breathless. One might say a genre routine, not too challenging, and definitely without any humour. A classic example of a British thriller, such as the long-running BBC series like Midsomer Murders or Inspector Morse. What could ultimately be objected to by Harlan Coban's solid thriller is too many side-by-side actions. Many events, some of which are not necessarily related to the main of the action, occasionally end in The blind street. But that doesn't mean that if you decide to look at The Stranger - you've made the wrong decision. Fun is guaranteed, as is light sleep after an evening dose of a light thriller.

Otherwise, written would be easiest to summarize in one sentence - Harlan Coben is one of the prominent writers of 'airport-bestseller literature'. Unpretentious and fun.