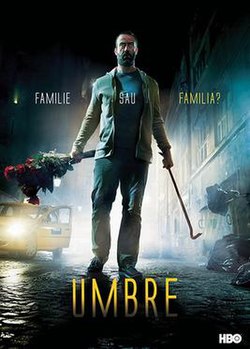 The third season of the Romanian thriller series.

HBO has its trump card for racing with Netflix in Europe. It's a branch on this side of the HBO world, HBO Europe, which produced the Romanian hit Umbre - Shadows. Why do I say hit series? Although IMBD is by no means reliable with movie ratings, it is still a bit more realistic with series, and only mega-series like Breaking Bad -9.5 have ratings like Umbre- 8.8 / 6.670.

Relu - starring Serban Paul - is a bodyguard and debt collector. He works as a fake taxi driver, and his real job is to raise money for the local Capitan, mobster - starring Dora Ana. Relu hides from his family, a wife and two teenagers what he is dealing with. The only one who knows the truth is his father-in-law, Nea Puiu, who already did the same job with the Capitan, and took Reul as a kid under his wing. Relu gets in trouble when he accidentally kills a guy while collecting the debt. After that, everything goes a bit wrong. Soon, Relu has more problems than hiding his job in front of his family. That's how the first season of Umbre begins and ends. In season two, Relu can no longer hide from wife Gina - starring Maria Obretin - what she's doing, and she leaves him with her minor son Chucky-starring Dan Hurduc. Daughter Magda - starring Madalina Craiu - marries Capitan's son Teddy- starring Gabriel Huiante - and she leaves the family home. Season three deals with the rise of Relu's and the fall of Capitan's dominion. Although Relu wants to get out of the vicious cycle of violence and drug trafficking, he fails to do so. Emilian's violent, dangerous police inspector - starring Laurent Banescu - turned his attention to Relu. Relu will sell his skin expensive or the situation will drag him to the bottom.

The hugely popular series on HBO Europe Umbre has received its third season, and by word of mouth, and here's a written submission, it is slowly gaining a growing fan base. Romanian actor Serban Pavlu has gained many fans with his manly appearance, and I would add that he is a good actor. In his performance, Relu is as severe as an emotional character. With real-life problems, jealous wife Gina, and headstrong children, Relu is outstanding, in flood of classic TV heroes. The characters, the situations, the scenery, and of course the story itself, it's closer to us, than let's say a classic American Ozark series. As much as let's say the same Ozark looked good to me. This is still something where we feel like the world to which Relu belongs. Just as imperfect as the society in which he lives, Relu is real, and you will not regret entering his world of Shadows, to which we belong. Far more than the world of Detroit or Chicago.

Umbre had his premiere on December 28, 2014, on HBO Romania. It took us even three years to get to the second season on November 12, 2017. Filming for the third season, however, took a shorter time. The third season opened on November 20, 2019. The author since the beginning was initially the same - Bogdan Mircea - creator and director. The series premiered at the Transilvania Internation Film Festival. As I wrote in the subtitle, this is the first Romanian series to go to the USA. Acorn Tv bought the rights, and the series aired on Amazon Prime and the Hulu stream.

Template for first season is Small Town Gangster, comedy that aired on Australian TV. The second season and third season are fully authored by Bogdan Mircea. The first two seasons have a classic 45 minutes per episode, the third season has seven episodes, almost one hour each.